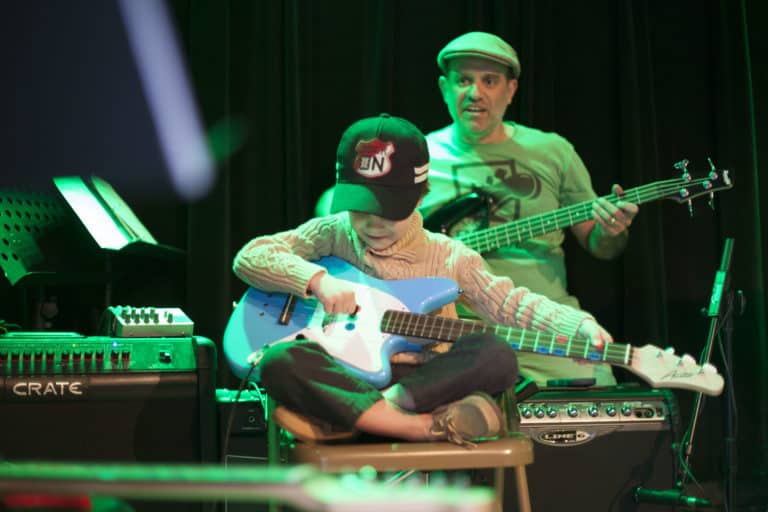 Joe Chila and his staff at Rochester School of Music (Rochester, MI) are doing a great job with their Kidzrock concerts. A few points worth noting in this performance.

Note how the instructors are behind the band and in the wings with dark lighting. This keeps the attention focused on the students both in the moment and in photos. You want to encourage audience members to take photos/video and post on social media. The fewer adults in the shot the more powerful the image.

The purchase of a $10.00 karaoke light helps transform this modest performance space into the feel of a rock concert

This a great example of an instructor learning the Kidzrock method and making it their own.  The drum intro with student and instructor creates a strong musical reference point for the band.

The most common mistake Kidzrock instructors make is counting a song off too fast. 56-60 bpm is the recommended tempo range. The instructor in this video counted the song off in 65-70 bpm range which can be too fast but works here. The instructor is clearly aware of his bands’ limitations but is also pushing them to rise to the occasion.

Here is another example of the instructor inserting his own ideas into the Kidzrock framework. Kidzrock songs (1-10) change chords every two measures. The instructor here took a different approach by doubling that length by playing each chord for 4 measures. This allows the students to really sink into each chord.

Instead of the standard “end on A” the instructor adds a bombastic drum fill ending. This was clearly coordinated with Joe on drums.

Kidzrock instructors have a tendency to talk too much during the performance of the song. The verbal cues and rhythm counts (slow-faster-faster-slow) are helpful during practice but can take away from the musicality of the concert. Having additional musical help in concert takes pressure off the instructor. The instructor in this video does a great job of not over talking or cueing chords.

The best investment you can make in your Kidzrock concert is adding support musicians. In this case, the instructor is on keys, a semi-hidden adult is on guitars, and Joe Chilla is on drums. The adult keyboardist and guitarist are doubling the student’s parts. The audience hears this is a unified sound making the kids sound better. Joe’s full beat but understated drumming takes it to another level. Another approach we recommend is for the drummer to play the students’ drum beat for the first pass of the song and an eighth note beat for the second half of the song. This gives the song a little bit of a lift after the repeat.